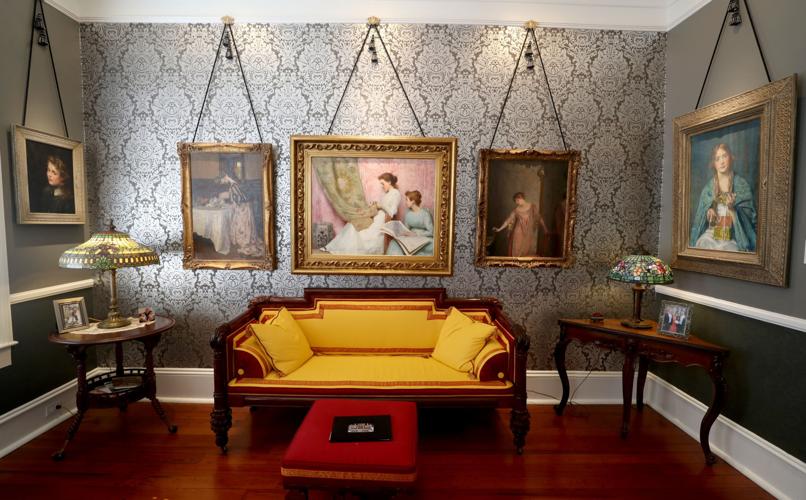 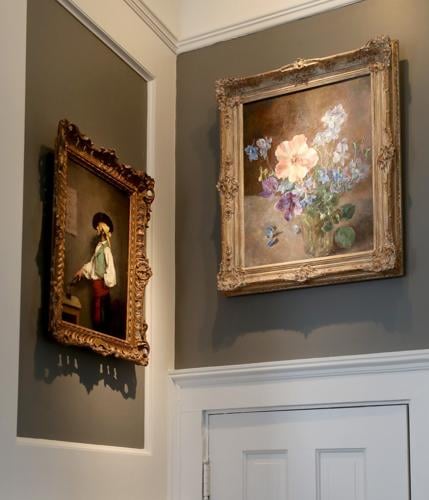 A painting of flowers by Henrietta Wyeth Hurd, right, is part of Howard “Chip” Hosek’s collection of American art. Hosek has paintings by the Hurd’s father, N.C. Wyeth, brother, Andrew Wyeth, nephew, Jamie Wyeth and her husband and fellow artist Peter Hurd in his collection. 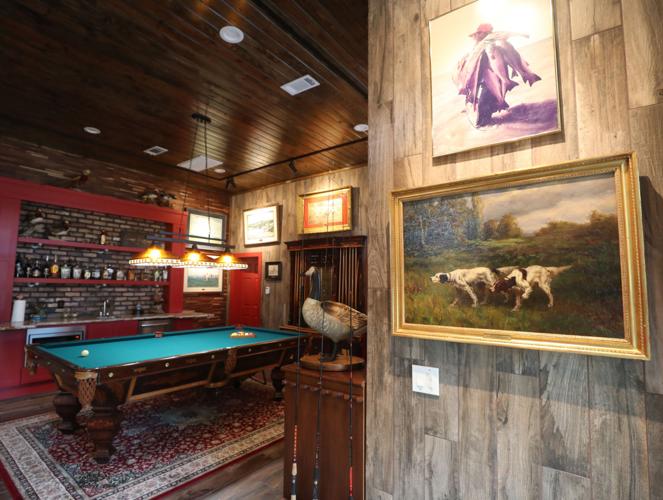 A painting of hunting dogs by artist Percival Leonard Rosseau hangs near the entrance to Howard “Chip” Hosek’s pool room. 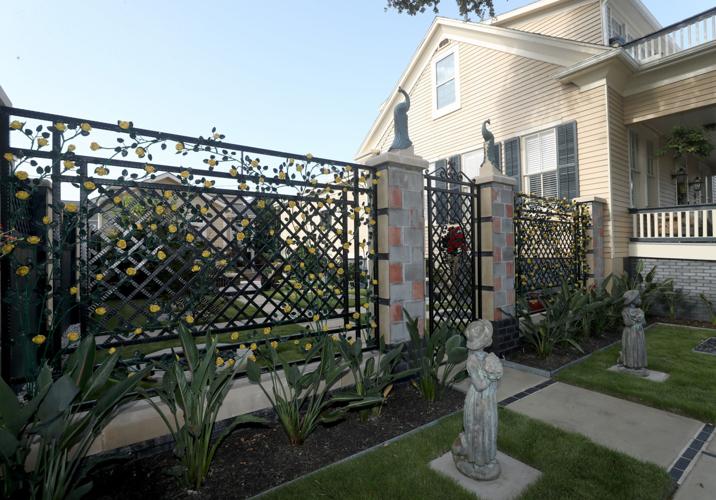 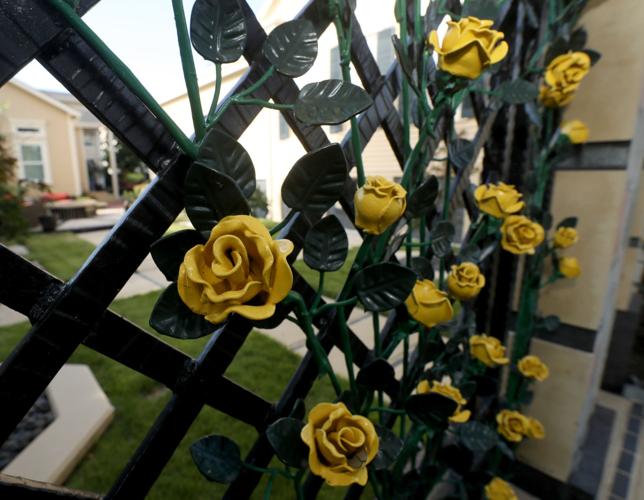 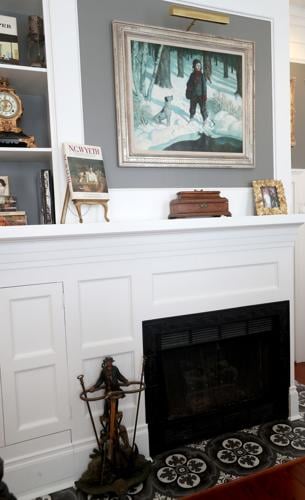 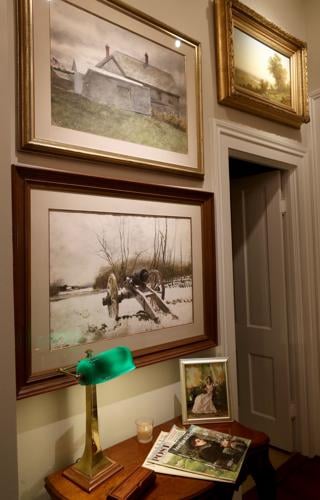 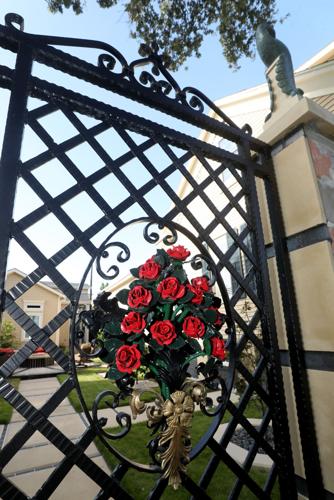 A bouquet of red, metal roses adorns the gate of Howard “Chip” Hosek’s custom fence at his East End home in Galveston. Passersby often stop and photograph the floral fence. 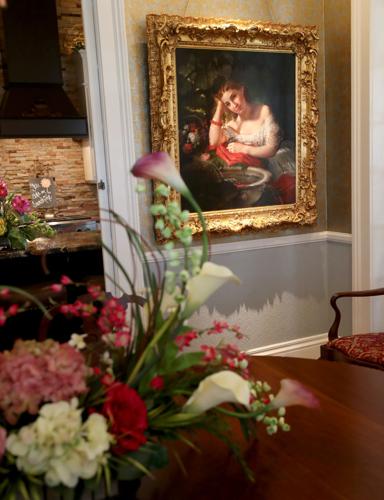 A painting by Lillie Martin Spencer hangs in the dining room of Howard “Chip” Hosek’s East End home in Galveston.

A painting of flowers by Henrietta Wyeth Hurd, right, is part of Howard “Chip” Hosek’s collection of American art. Hosek has paintings by the Hurd’s father, N.C. Wyeth, brother, Andrew Wyeth, nephew, Jamie Wyeth and her husband and fellow artist Peter Hurd in his collection.

A painting of hunting dogs by artist Percival Leonard Rosseau hangs near the entrance to Howard “Chip” Hosek’s pool room.

A bouquet of red, metal roses adorns the gate of Howard “Chip” Hosek’s custom fence at his East End home in Galveston. Passersby often stop and photograph the floral fence.

A painting by Lillie Martin Spencer hangs in the dining room of Howard “Chip” Hosek’s East End home in Galveston.

One private collection includes the original work of four artists from three generations of the Wyeth family, considered the first family of contemporary American art. And that art collection is in Galveston.

N.C. Wyeth, Andrew Wyeth, Henriette Wyeth Hurd and Jamie Wyeth all painted pictures that are now in The Hosek Collection of American Art.

The illustration of the pensive boy and his dog appeared in the July 1931 issue of McCall’s Magazine in a profile about Lindbergh. The next year, Lindbergh’s toddler son was kidnapped and murdered.

Hosek also has a copy of that issue of McCall’s. He now has more than 100 pieces of American art in his collection, but it started on a smaller scale.

“I started with realism,” Hosek said.

Hosek grew up in the Houston area. In 1978, he started a masonry construction company, Brickfield Builders, based in Pearland., where he lived, too. In 2018, he bought the Allardyce Cottage, built between 1859 and 1860 by John Allardyce, a shipyard caulker by trade, and his wife Catherine. The house survived the 1900 Storm among other natural disasters. Hosek moved into the house in October 2019.

Hosek’s collection that fills the walls and hallways of his historic Galveston home initially showcased American art from 1850-1950, but it has expanded. The collection now features art created after 1950 to now, including that of New York Neo-Pop artist Peter Tunney.

The first art Hosek bought were prints of artist John Cowan’s work. Hosek was at a Resolution Trust Corp. auction in 1989 and bought a Cowan painting for $500. That’s how the collection started. Hosek looked for more of Cowan’s paintings and eventually had the second-largest Cowan collection.

An art gallery owner in Austin called him one day in 1997 to let him know about some Cowan paintings that were available and for sale. Hosek went right away.

“I walked in, and I saw these two paintings,” Hosek said as he pointed to “Gunsight” by Andrew Wyeth and above it a winter landscape by Jamie Wyeth, Andrew’s son.

Hosek made a decision. He sold all of his Cowan collection to acquire the two Wyeth paintings. The Hosek Collection of American Art was born.

“I started reevaluating paintings,” Hosek said. “What I had before were all regionalists.”

The collection now includes work by Norman Rockwell, George Henry Durrie and John William Casilear. The collection also includes works by noted American women painters such as Lily Martin Spencer, Jennie Augusta Brownscombe, Jessie Wilcox Smith and Jessie Hazel Arms Botke. He has Texans on the wall, too, such as the blue-bonnet-scapes of Robert William Wood.

Hosek often lends pieces of his collection to museums. His collection twice has been an entire exhibit at the Pearl Fincher Museum of Fine Arts in Spring.

“Find that period where an artist changed,” he said. “Artists have to have a niche to take them to the next level.”

Collectors need to think about displaying the work, he said.

“Fifty-five percent of homes have 8-foot ceilings,” Hosek said. “Do not collect art too big to hang by yourself. Homes rarely have a wall big enough to properly display large works of art. The perfect-sized painting is 20-by-24. That could hang on any wall in anyone’s house.”

Never buy a painting that deals with death or religion, he said.

“The perfect painting is a woman in a white dress in a small rowboat with a parasol, blue water and green background,” Hosek said. “Throw in a puppy. That is your perfect painting.”

Don’t just buy a painting because the artist was famous, Hosek said. A collector has to evaluate where the piece fits on a scale of 1 to 10.

“Do not settle,” Hosek said. “Choose the best.”

Walking through his renovated home is like walking through a Currier & Ives catalog of snowscapes and Hudson River Valley scenes. But the large, modern kitchen that flows into a sunroom is full of airy, bright paintings that are light and breezy.

The breeze flows into the backyard that Hosek designed for comfort. Outside, there’s a hammock by the pool. Bougainvillea crawls up a trellis near a fire pit.

An outbuilding contains a large pool room with an antique rosewood-inlay pool table made in 1870. Paintings with hunting themes hang on these masculine walls.

Passersby often stop at the fence bordering the backyard to look at yellow roses that seem to be growing there, but they’re steel buds and blooms welded onto twisting vines with leaves Hosek bent into place. The gate features a bouquet of red roses.

Inside the gate is a path to the impressive art collection that both American Art Review and Fine Art Connoisseur magazines have featured on their covers.

Hosek focused on realism earlier in his collection career, but he has a new appreciation for impressionism, he said.

“If I could do anything, I would love to gather together the 10 best American impressionists who ever lived and bring them to Galveston,” Hosek said.

His time-travel fantasy is to have these painters set up their easels at the same exact time in the same spot on the island and have them paint the scene before them.

“If you did that with realists, they would all paint the same scene,” Hosek said. That would never happen with impressionists, who would add colors and shapes and textures they felt and put their emotion on the canvas, he said. “Each painting would be different.”

Hosek continues to look for American artwork to grow his collection.