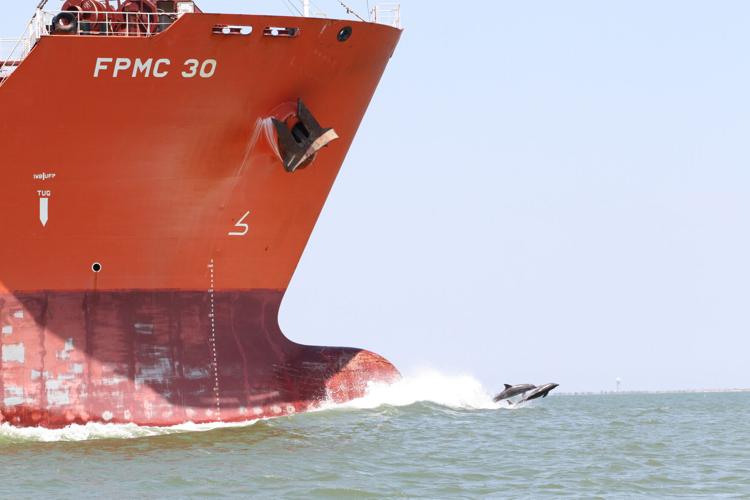 Two dolphins ride the bow waves of a vessel in the ship channel. 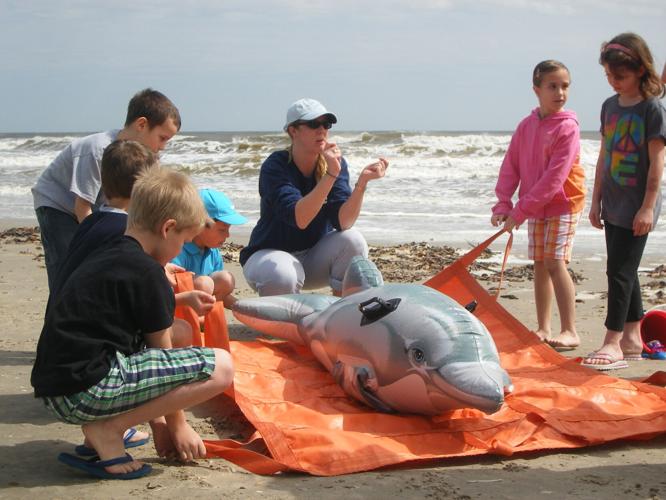 The Texas Marine Mammal Stranding Network educates children about how to rescue a stranded dolphin. 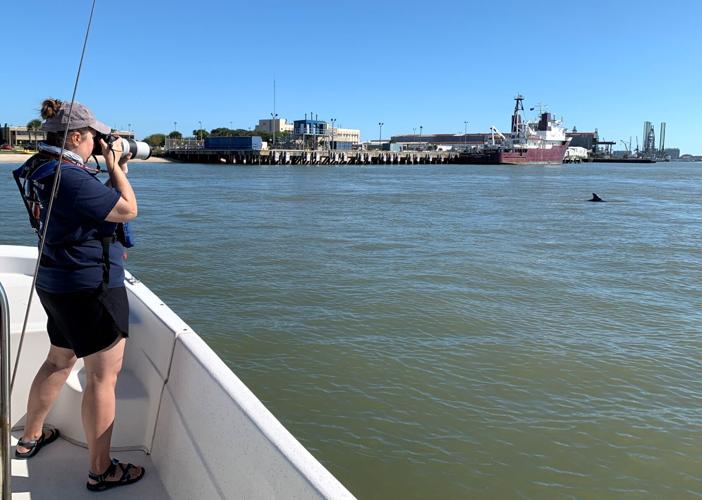 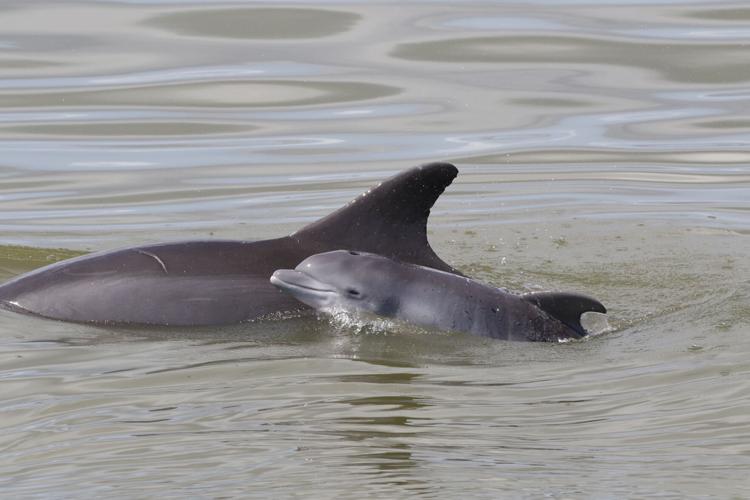 A bottlenose dolphin mother and calf pair surface to breathe in Galveston Bay. Photo taken under a research agreement between the National Marine Fisheries Service and Texas Marine Mammal Stranding Network under the authority of the Marine Mammal Protection Act. 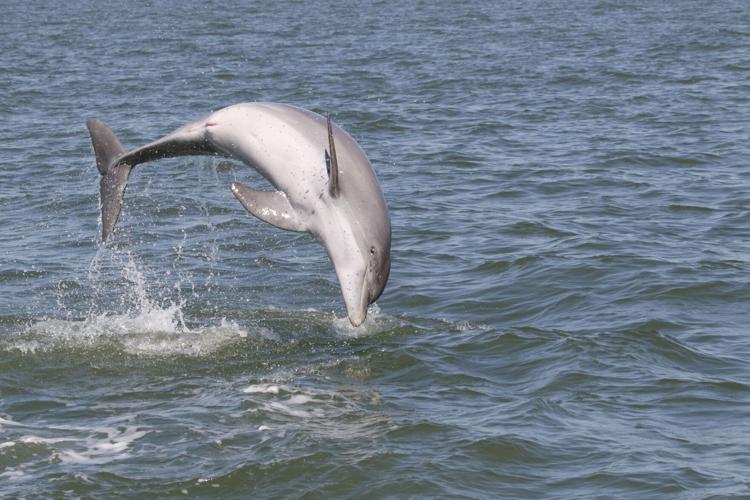 A bottlenose dolphin leaps fully out of the water in Galveston Bay. Photo taken under a research agreement between the National Marine Fisheries Service and Texas Marine Mammal Stranding Network under the authority of the Marine Mammal Protection Act.

Peer over the side of the Galveston-Port Bolivar Ferry or squint at the bow of a tanker vessel in the ship channel and there’s a good chance you’ll see dolphins gliding through the water.

Often a symbol of good luck, dolphins have become one of the most beloved marine creatures. But for researchers studying the waters around Galveston County, the mammals still contain many mysteries.

The upper Texas coast is home to common bottlenose dolphins.

They’re inherently playful creatures and have been observed riding on the bows of tanker ships or tossing flounder like Frisbees, said Sarah Piwetz, conservation biologist with the Texas Marine Mammal Stranding Network.

The organization rehabilitates and studies injured or sick dolphins that strand, or wash up on Texas beaches.

Dolphins are very smart creatures, and people often observe them foraging along bulkheads.

“We think they may be using it as a barrier to herd prey,” Piwetz said.

Scientists still are trying to figure out exactly how many dolphins are in Galveston Bay, said Vanessa Mintzer, research scientist with the Galveston Bay Foundation’s Galveston Bay Dolphin Research Program.

For the most part, dolphins tend to stick to a certain region, Piwetz said.

Galveston Bay dolphins will stay in Galveston Bay. Near-coastal dolphins stay near the coast. And off-coast dolphins roam the open waters of the Gulf of Mexico, she said.

But these aren’t hard-and-fast rules.

It takes a long time to get data on population trends because dolphins live for decades, Mintzer said. The oldest recorded dolphin in the Gulf of Mexico is 67 years old, she said.

Scientists can learn how many dolphins are in the bay by taking photos of their dorsal fins. The nicks and scratches and imperfections are unique to each dolphin, so scientists can track animals over time.

Mothers and calves tend to stick together longest, but other dolphins pair up, too, Mintzer said.

THE MYTH OF DOLPHINS

Dolphins have long captured the imagination and are very social creatures.

Dolphins are among only a few animals that show true playfulness and that’s interesting to people, Piwetz said.

“People are just fascinated with animals that are adapted to the sea and can swim and adapt to the sea,” Marshall said.

Stories abound of dolphins protecting people or guiding lost mariners to shore, and while they’re not all true, those stories create a mythos around the animals, he said.

“There’s enough stories out there,” Marshall said. “That kind of mythology really holds people’s imagination. I think for a lot of people, especially people who love the water, they’re kind of envious. They wish they could swim as well as dolphins.”

Dolphins also are very easy and common to see, which makes them stand out in people’s minds, Piwetz said.

“I imagine if I was to see a land mammal that was 800 feet long and upwards of 300 pounds, that would be a striking thing,” Piwetz said.

But dolphins’ interactions with humans aren’t always a good thing.

Dolphins have begun swimming behind shrimping boats to feast off the cache of fish attracted to the vessels, Mintzer said.

“We don’t know what kind of impact that could be having on dolphins,” Mintzer said. “There might be dolphins that have become very dependent on shrimp trawlers as a food source. It could have a lot of different consequences, the most drastic one being mortality because they could become entangled in trawler gear.”

The impact on dolphins of so much shipping, fishing and petrochemical activity in the bay also is largely unknown, Piwetz said.

People also should understand what to do if a dolphin strands, Marshall said.

People shouldn’t push them back into the water, or try to touch them.

Instead, people should call the stranding network at 1-800-962-6625 to alert scientists who can help the dolphin.

Still, people tend to love dolphins and love seeing them leaping through the waves.

And sometimes, humans paying attention to dolphins is a good thing, because studying them is key to keeping the bay and surrounding waters healthy, Mintzer said.

“From a science perspective and a conservation perspective, dolphins are indicator species,” Mintzer said. “Because they’re at the top of the food chain and they live long lives, their health and survival can be connected to the health of the ecosystem.”