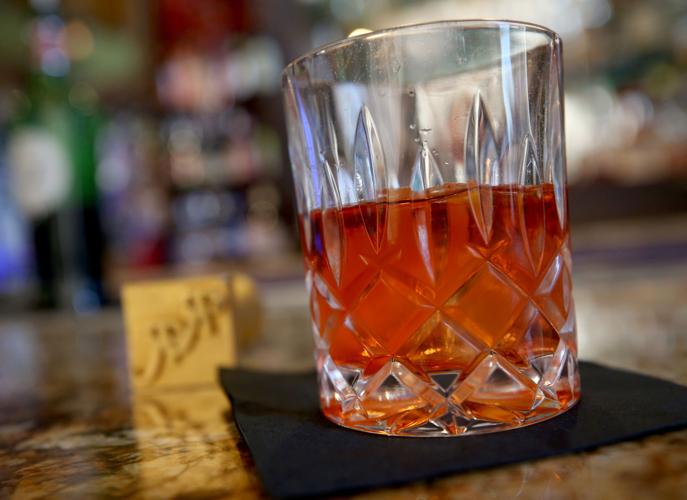 The classic Italian cocktail, the Negroni at Riondo’s Ristorante in Galveston. 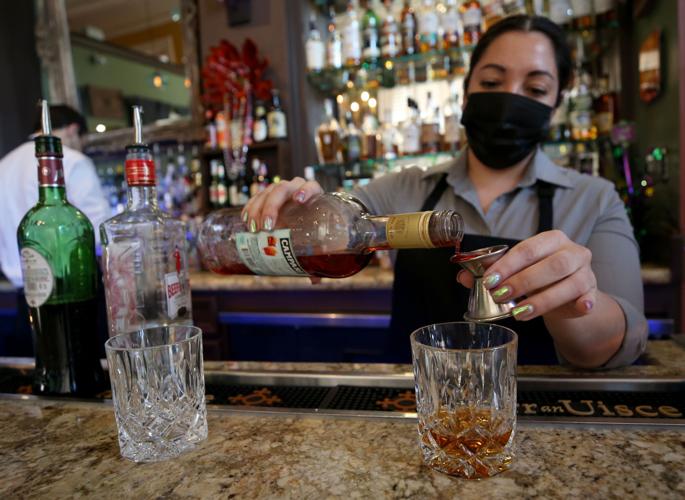 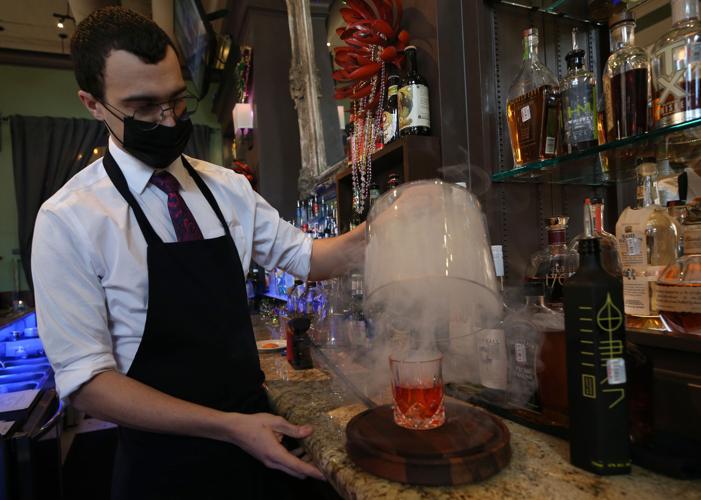 Devlyn Mahanay, a bartender at Riondo’s Ristorante, 2328 Strand, adds smoke to a Negroni, for a twist on the classic Italian cocktail, served at the restaurant in Galveston on Wednesday, Feb. 3, 2021. 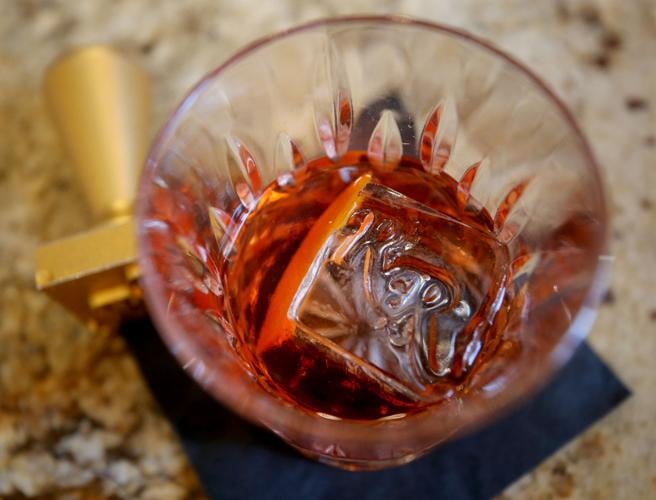 With the initials for Riondo’s Ristorante melted into a craft ice cube, a Negroni, the classic Italian cocktail, is ready to serve. 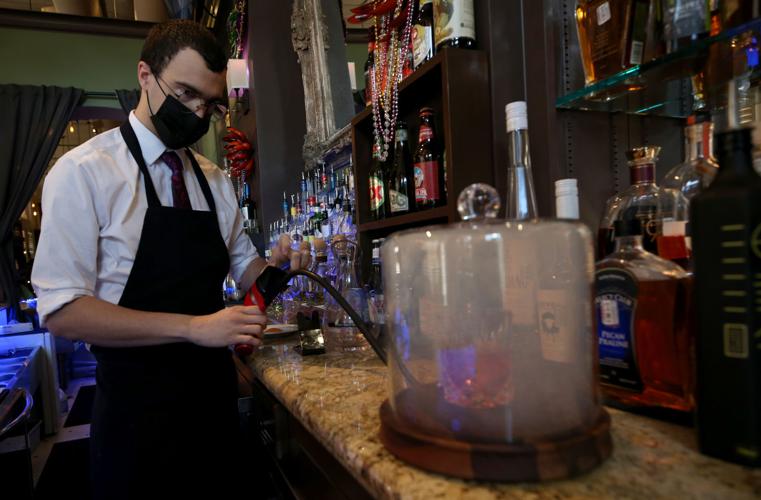 Davlyn Mahanay, a bartender at Riondo’s Ristorante, 2328 Strand, adds smoke to a Negroni, for a twist on the classic Italian cocktail, served at the restaurant in Galveston on Wednesday, Feb. 3, 2021.

The classic Italian cocktail, the Negroni at Riondo’s Ristorante in Galveston.

Devlyn Mahanay, a bartender at Riondo’s Ristorante, 2328 Strand, adds smoke to a Negroni, for a twist on the classic Italian cocktail, served at the restaurant in Galveston on Wednesday, Feb. 3, 2021.

With the initials for Riondo’s Ristorante melted into a craft ice cube, a Negroni, the classic Italian cocktail, is ready to serve.

Davlyn Mahanay, a bartender at Riondo’s Ristorante, 2328 Strand, adds smoke to a Negroni, for a twist on the classic Italian cocktail, served at the restaurant in Galveston on Wednesday, Feb. 3, 2021.

In the global world of cocktails, is there anything more Italian than the beloved Negroni?

Here’s a drink named for an Italian count, making its debut in a Florence bar and created by a bartender named Fosco Scarselli.

There’s no question the Negroni holds an honored place in the hall of Italian heritage right along with Chef Boyardee, macaroni and cheese, pizza and, yes, even SpaghettiOs. This Italian gem, like the others, has questionable origins, but it’s still a great drink.

The classic Negroni as we know it today just marked its 100th birthday in 2019, according to legend. The story has it that Italian Count Camillo Negroni walked into his favorite Florence bar, Café Casoni, and asked bartender Scarselli to mix up his usual drink, but this time, give it a hit of something more potent.

Taking the count’s regular cocktail, a drink called the Americano, Scarselli mixed the usual Campari and sweet vermouth, but rather than topping it with soda water as the Americano called for, he poured in gin. It was amore at first sip.

It also found other fans and rather quickly.

By the end of 1919, the Negroni family founded Negroni Distillerie in nearby Treviso to bottle and sell the drink. Anyone visiting Italy after that had to say they had sipped this marvelous drink or their trip just wasn’t complete. While working on a movie in Italy, Orson Welles described a “new” drink he had discovered called the Negroni.

“The bitters are excellent for your liver,” he said, referring to the Campari. “The gin is bad for you. They balance each other.”

That the Negroni is a famous drink and became sought after by anyone visiting Italy in the first half of the 20th century, as well as any number of Italians who sought cocktails, isn’t in doubt. It remains a most popular and requested drink worldwide a century later.

Here on the Third Coast, the great Italian migration set sail before the Negroni was born, but as the saying goes, it got here as fast as it could.

Any number of beverage-pouring establishments in these parts have it on the menu and others, touting Italian roots, pay it homage. Such is the case with Riondo’s Ristorante, 2328 Strand in downtown Galveston.

“We figured that since we are an authentic Italian-scratch kitchen, we would have our own craft take on a classic Italian cocktail, as well one of our own creation,” said Staci Villanueva, bar manager at Riondo’s. “We offer the classic Negroni made with gin, sweet vermouth, Campari and a flamed orange peel for garnish. But we also make the Negroni Yuzu made with Yuzugin Japanese Citrus Gin.”

As an added touch of originality, Riondo’s offers to infuse both of its Negroni cocktails with an applewood smoke for an even richer and smoky flavor.

Messing with the national drink of Italy might seem outright anti-Italian, but like so many things flying the Italian flag, including the Negroni, the actual ancestry has many versions.

Starting with the count, the family at one time said there was no record of such a count, even going back hundreds of years. One part of the family, descendants of Gen. Pascal Olivier de Negroni, Count de Negroni, claim he, not some Camillo, was the Count Negroni who invented the drink in 1857 in Senegal.

Count or no count, what truly gives Camillo’s story of the drink credence is the bartender Scarselli. Scarselli was most certainly real and celebrated for decades after the incident in Florence. Scarselli repeated the story of how Negroni came to his bar after returning from a trip to England where he’d developed quite a passion for gin. Negroni also had traveled extensively in the United States, said to have been everything from a gambler to a cowboy, and fallen in love with this marvelous thing Americans called a “cocktail.” Just before he died in the late 1960s, Scarselli was presented a medal by the professional association of Italian barmen with the inscription, “To Fosco Scarselli, genial preparer of the Negroni.”

That medal leaves it vague as to whether Scarselli actually invented the drink, however.

As for the drink itself, the Negroni’s lineage points to an Italian aperitif called Milano-Torino, made with nothing but equal amounts of bitter Campari and Italian sweet vermouth. It proved too bitter and thick for visiting American palates, so one sales-wise bar began adding soda water to lighten it up. Because it was made for the free-spending American tourists, the drink became the Americano. The Americano — not the martini — was the first cocktail ordered by James Bond in Ian Fleming’s first 007 book.

It was when someone tossed the water and replaced it with an equal amount of gin the classic Negroni was born.

The Negroni’s simplicity, equal parts Campari, sweet vermouth and gin, is one reason for its sustained popularity. Served with or without ice in a chilled cocktail glass, it’s elegant, not too sweet or bitter and most of all, refreshing.

“The Negroni is a popular drink for what I call ‘professional drinkers,’ because of its potency, class and history,” Villanueva said. “The strong nature of the drink may be intense for some, but an experienced tongue knows a great flavor.”

Another reason is its versatility, as Riondo’s shows. Like the begetting part in the Christian Bible’s Old Testament, the drinks that have evolved from the original Negroni are endless as well as delicious.

One of the most notable Negroni children was made famous in Paris by Harry’s New York Bar by American bartender Harry MacElhone, who was there plying his skills while the United States worked its way through Prohibition. The Boulevardier, named after a popular magazine of the time, replaces the gin with bourbon.

Another Italian take on the drink comes from Milan, where a careless bartender grabbed a bottle of sparkling wine instead of gin. It turned out, the customer liked the drink, so it stayed. It’s called Negroni Sbagliato, which translates to “wrong Negroni.” Taking its lead from this, the Quill is made the same way except with the addition of a quarter of an ounce of absinthe.

In creating the Negroni Yuzu, Villanueva concedes she had her doubts.

“I thought the citrus nature of the gin would be too intense combined with Negroni components, but I was deliciously mistaken.”

At the same time, no matter how good the plaster statue of Michelangelo’s David looks on the coffee table, the real one has stood the test of time.  

This is the classic Negroni made at Riondo’s Ristorante in Galveston. The flamed orange peel adds a nice hint of flavor to the drink as well as puts on a show, but this is a case where making the garnish is more difficult than making the drink.

Pour the ingredients in an old-fashioned cocktail glass, add the ice cube and stir. Add the garnish.

To flame an orange peel, cut off both ends of firm orange — the thicker the rind the better. Insert a sharp knife or spoon between the rind and meat of the orange and carefully separate them. Cut the rind into strips, making sure all the citrus flesh is removed.

Place a lit match between the cocktail and the twist, which should be rind-side down. Bring the rind close to the flame, approaching at a 45-degree angle from above. When the peel is very close to the match, give it a good squeeze with your thumb and forefinger to squirt the oil into the flame. A small burst of fire should brush the liquid in your glass.

After it’s lit, drop the peel into the cocktail.