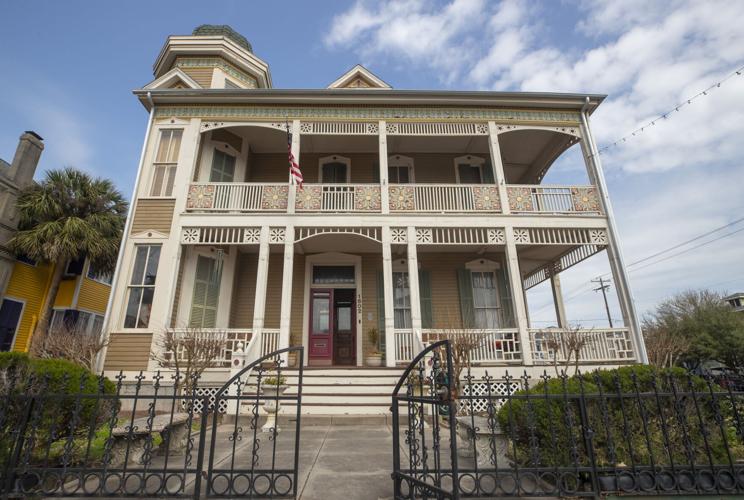 Mike and Nancy Hughes own the historic Joel B. Wolfe home on Galveston’s East End. The house, built in 1886, later became known as Maison des Fleurs and features floral designs on its turret, balustrades and cornices. 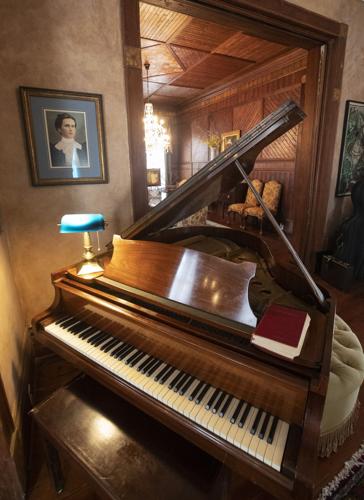 Nancy Hughes’ piano sits in a corner of the formal living room. She and her husband both are accomplished musicians. Mike plays cello in the Galveston Symphony Orchestra and Nancy is a violin player. 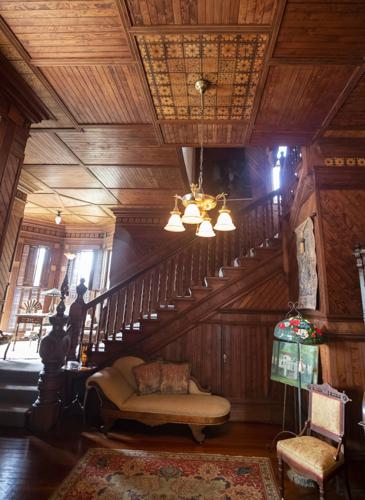 Beautifully carved pine wood paneling is a hallmark of Mike and Nancy Hughes’ historic Galveston home. The couple spent months stripping and refinishing the wood to its golden glow when they purchased the home. 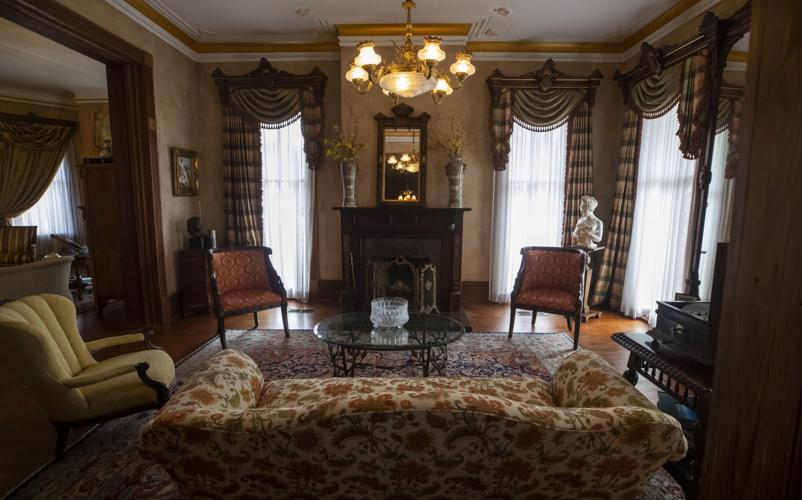 One of two large living rooms decorated in Victorian style. 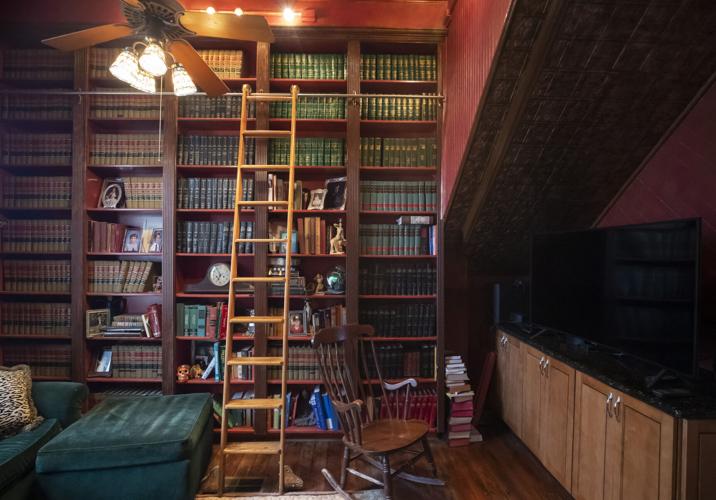 Mike and Nancy Hughes like to relax in their media room featuring a floor-to-ceiling bookcase lined with legal books and adorned with a rolling ladder. 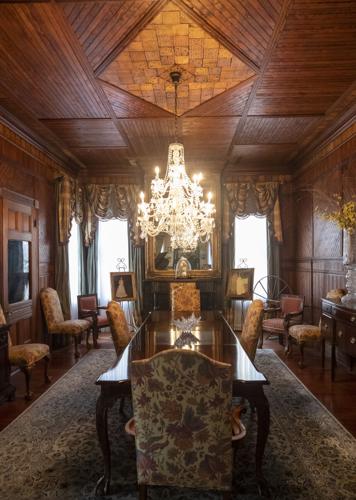 The formal dining room in Mike and Nancy Hughes’ historic Galveston has one of the house’s eight fireplaces and, like the rest of the home, features impressive floral woodwork on the pine paneling. 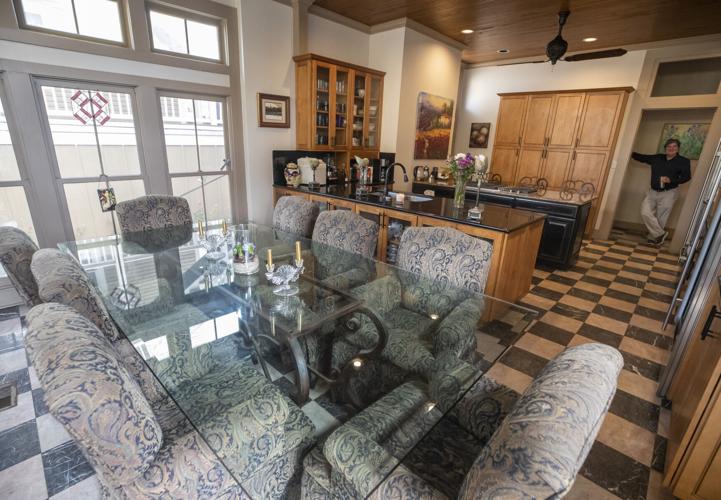 The fully-modernized kitchen in Mike and Nancy Hughes’ historic Galveston home includes and extension that serves as a light-filled family dining room. 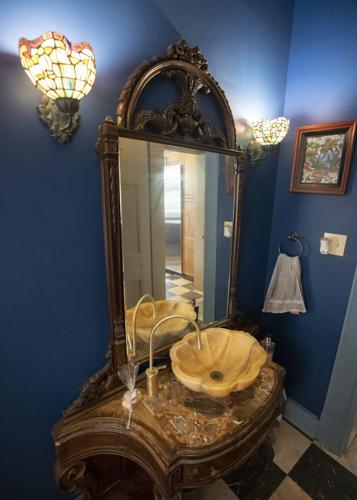 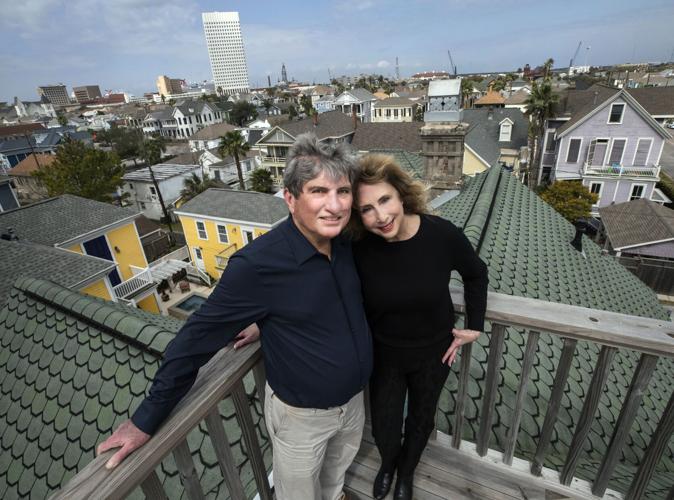 Mike and Nancy Hughes’ historic Galveston home features a widow’s walk that offers an expansive view of the island.

It’s fitting that Mike and Nancy Hughes’ East End Historic District house in Galveston was known as Maison des Fleurs. After all, many happy memories have blossomed there in the more than 30 years they’ve owned it.

The 1886 Joel B. Wolfe home on Ball Street was built by the machinery dealer for his wife, Isabella, after the Great Fire of 1885. It had many owners over the years and for some time it was a duplex. In 1975, it was purchased by Robert Clark, who named it Maison des Fleurs and began restoration. In 1976, the Galveston Historical Foundation featured it in its second Historic Homes Tour as a “Restoration in Progress.”

The home is notable for its decorative floral designs on the turret, cornices and balustrades of the second-floor gallery. The floral motif continues inside, where the Queen Anne-inspired entry and adjacent dining room have paneled ceilings and walls of pine wood stamped with flowers in an impressive display of Victorian artisanship.

Mike and Nancy Hughes purchased the historic Ball Street home in 1988 and continued to restore it.

“We’ve really tried to be preservationists,” Nancy said. “We utilized old photographs to have the cupula restored. It was built on the ground and then they had to use a crane to put it in place.”

The impressive floral woodwork inside the home was dark thanks to more than 100 years of history. So, when the couple first purchased the house, they spent months stripping and refinishing the panels to return the wood to a golden glow. It was tiring work, but worth it for the finished result. The couple also had the exterior painted in a pretty palette inspired by the original tiles in the entrance.

Mike is an attorney at McLeod, Alexander, Powel & Apffel. Mike and Nancy both were born on Galveston Island and were high school sweethearts at Ball High.

Growing up on the island, Mike was aware of the house and its distinctive floral design, he said. It wasn’t until they were adults that they had their first look inside. Before they owned it, they performed on the grand staircase as part of a string quartet. Mike plays cello in the Galveston Symphony Orchestra and Nancy is a violin player. Hanging on the wall, where they played, is a painting of Mike and his cello.

In addition to their original restoration work, the couple had to do more remedial work after it flooded in Hurricane Ike, which struck in 2008. The home’s historical marker was swept away, and a metal plaque shows how high the water was in the downstairs living rooms. Luckily, it wasn’t high enough to damage Nancy’s piano, which sits in the formal living room.

The home features a mixture of formal and fun family spaces downstairs.

There are two large living rooms decorated in Victorian style. More impressive woodwork in Eastlake style can be found in the front room, with dark wood and gold filigree around a large mirror, the fireplace and windows.

In the cozy media room, there’s a floor-to-ceiling bookcase lined with legal books and adorned with a rolling ladder. It’s a room where the couple likes to relax with their grandchildren.

The formal dining room has one of the eight fireplaces in the home. Two are gas while the rest are decorative. The lamp on the staircase post is original and the chandelier also is original to the home.

The updated kitchen, with modern appliances, features marble counters and a checkered marble tile on the floor. The kitchen has been extended to include a light-filled family dining room with screened, double-glazed glass walls on three sides. On the first floor, other rooms include a nook by the grand staircase, a guest bathroom and a staircase to the backyard.

Upstairs, there are four bedrooms and two bathrooms. The bedrooms’ décor continues the Victorian theme with thoughtful details such as the hand-painted wallpaper in the Asian-themed primary bedroom.

“Once I stripped them back, I thought the gray slate was a little plain, so I painted them to have a faux marble in colors to match each room’s décor,” she said.

From the second floor, there’s a staircase to the widow’s walk, which offers an incredible 360-degree view of Galveston’s East End out to the Grand Galvez hotel and Galveston Island Historic Pleasure Pier on one side and the Port of Galveston on the other. It’s a place for coffee and yoga, to watch the cruise ships come and go or enjoy fireworks.

In the backyard, the carriage house has a game room upstairs featuring memorabilia from Galveston’s pool hall. Below is a one-bedroom, one-bathroom apartment.

A pool, barbecue, fire pit and couches sit under an outdoor room created by an impressive steel and mesh structure behind which is a water feature with fountain, bridge and pond.

While the home holds 136 years of Galveston’s history, for the Hughes, it’s a place of happy personal memories, they said.

“We’ve raised our three children here and now our four grandchildren enjoy it,” Nancy said. “One of our daughters had a brunch here after her wedding and one of Mike’s cousins was married here.”

The April edition of Coast Monthly features the historic home of Mike and Dr. Nancy Hughes on Galveston's East End. The April issue had gone to press two weeks before the untimely, tragic death of Nancy Hughes, who was killed in a hit-and-run crash early on the morning of March 18 while riding her bicycle. Hughes’ death shocked and saddened thousands of islanders. The feature has become a tribute to the love Mike and Nancy Hughes had for each other, their family and their beautiful home.