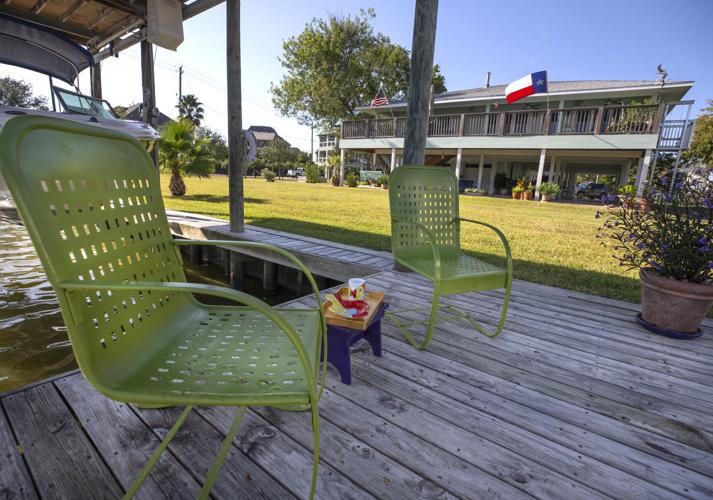 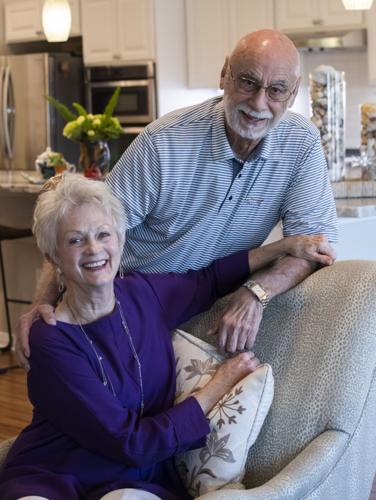 George Najarian and Lizette Gaudin moved to their seaside cabin in Kemah full time in 2019. Najarian has owned their canal house for decades. They nearly doubled the cabin’s size, adding more bedrooms, bathrooms, an office and dining room. 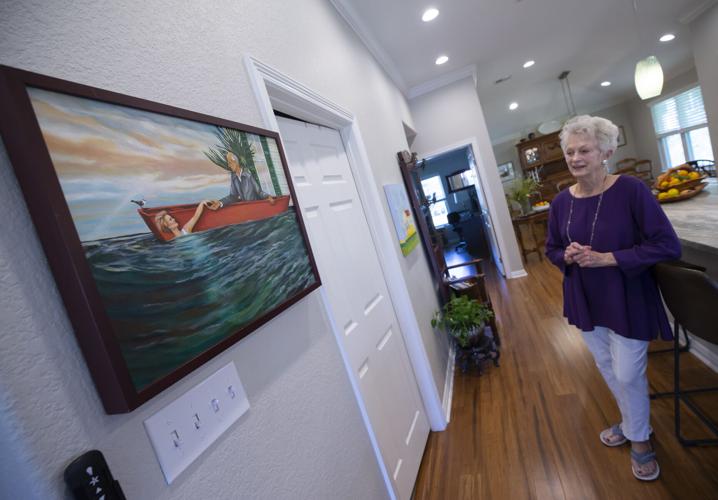 A painting depicting Lizette being rescued by George in the floodwaters of Tropical Storm Allison hangs at the couple’s home. The painting, created by a friend, is symbolic of the couple’s meeting after the 2001 storm. 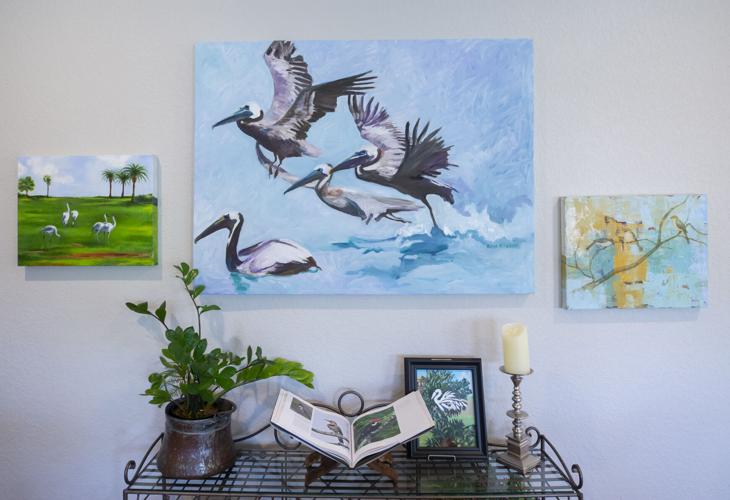 A wall in Lizette Gaudin and George Najarian’s Kemah home pays tribute to birds, a theme found throughout the house. 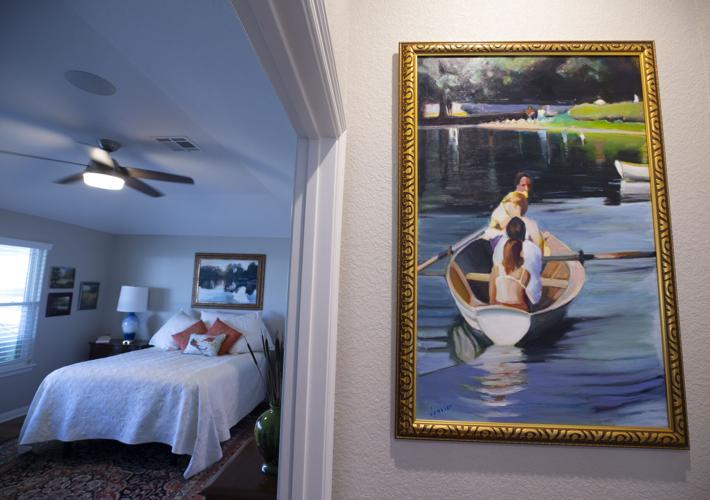 Paintings by Galveston-area artists adorn the walls throughout the house. 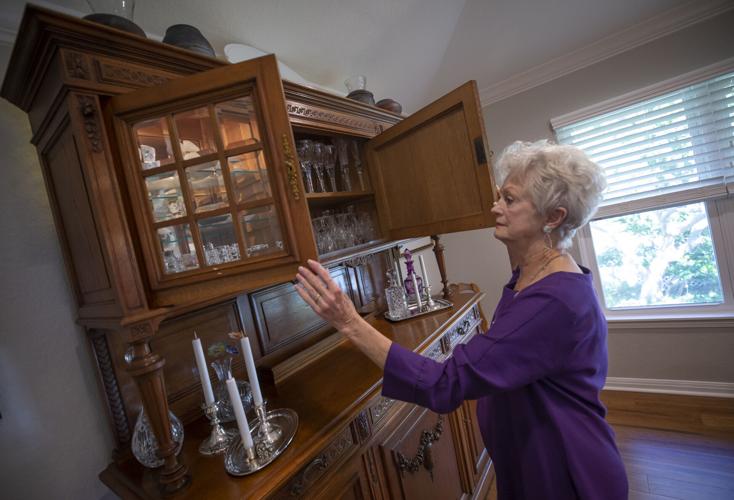 Lizette Gaudin opens a door in a beautifully crafted French country-style china cabinet in the dining room of her Kemah home. 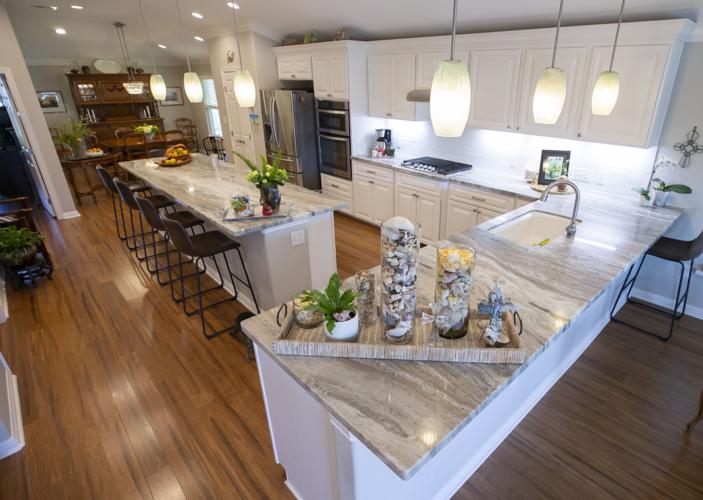 The chef’s kitchen features a long granite island for prepping and serving. 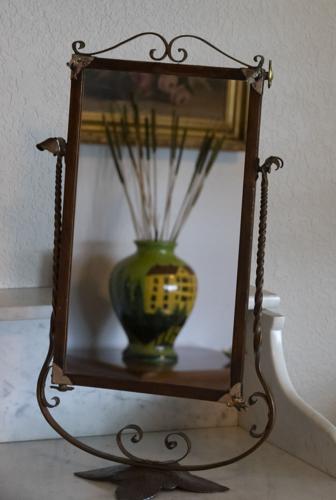 A mirror created by Lizette Gaudin’s grandfather Alfred Schoeffler, who was known for his ornamental ironwork. 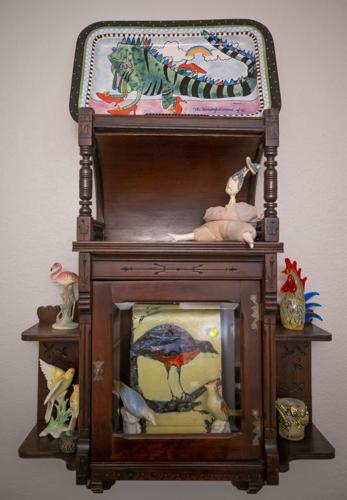 The first antique Lizette Gaudin ever purchased is a small, wall-mounted cabinet. 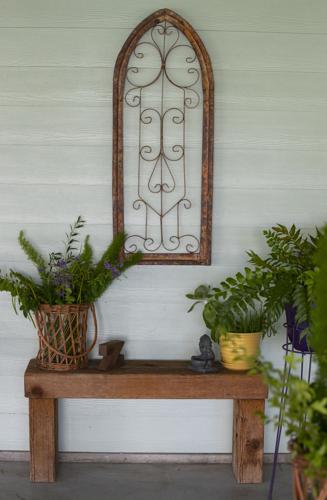 An assortment of potted plants decorate the downstairs deck. 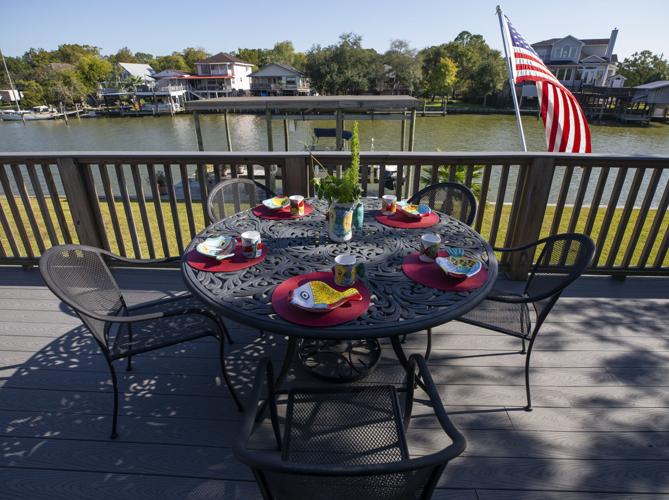 A table on the upstairs deck offers a great view of the canal. 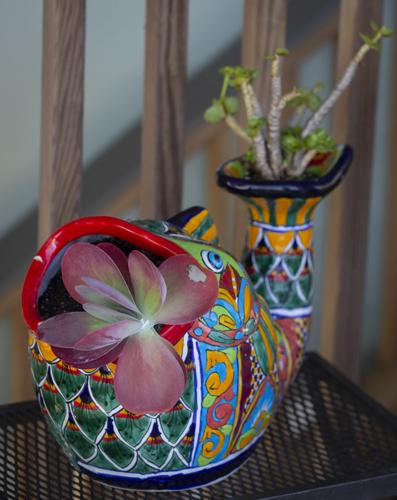 Succulents sprout from a brightly colored Talavera fish on the patio. 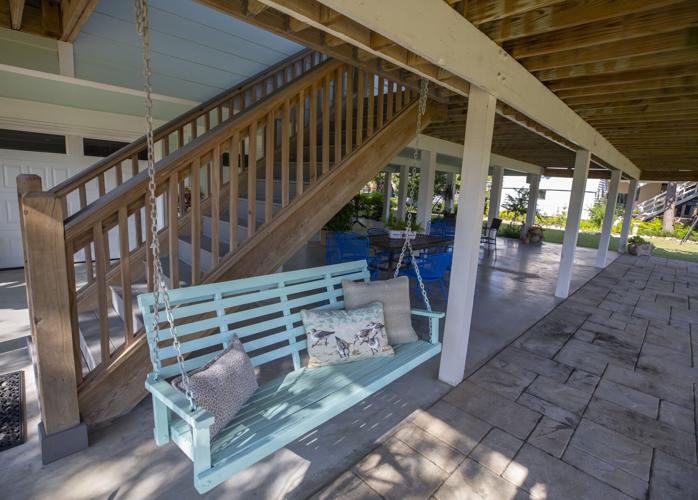 A swinging bench is one of many seating options on the downstairs deck.

If you keep something long enough, it eventually comes back in style, or so the saying goes. George Najarian and Lizette Gaudin learned that when they returned to the upper Texas coast and settled in Kemah.

Najarian has owned their canal house for decades. His first wife’s father used the property in the 1960s as a fishing camp and the half-acre lot stayed in the family. In 1975, he built a little cabin they used only when they went fishing. But it became very useful to them in 2008 when Najarian and Gaudin’s Galveston house flooded during Hurricane Ike. The couple moved to the Kemah cabin for a few months while their East End home was being restored.

Shortly thereafter, they moved to Georgetown, Texas, but the couple missed the water and the beaches. In 2019, they headed back to the coast and their little seaside cabin. But it needed some serious work, they said.

They added more bedrooms, bathrooms, an office and dining room, nearly doubling the cabin’s size. They expanded the outdoor space below, giving them more water views and dining areas on the huge deck and under the raised house. And they worked hard on creating a yard with gardens and a park-like environment around the house.

“We decided we needed to be on the water and in this part of the world again,” Gaudin said. “We added 1,000 square feet to the cabin. We made it into a very nice fishing camp.”

The “front” door to the house, which is really in the back, opens to the kitchen and living rooms. But this interior door stays open all the time, giving the couple unobstructed views of the water. The living room is comfortable, and shelves are lined with books and special items. Large paintings by Galveston-area artists adorn the walls.

One painting is especially significant to them. It depicts a man — Najarian — in a small boat rescuing a woman — Gaudin — who is floundering in flood waters. The back story was that after Tropical Storm Allison in 2001, Najarian met Gaudin when he traveled to Houston to help in her flooded home. There was an instant spark, and shortly after the couple wed and moved to Galveston.

He didn’t actually save her from floodwaters in Brays Bayou, but a friend painted the picture as her interpretation, Gaudin said.

Part of the restoration of the cabin was creating a chef’s kitchen, with a long granite island for prepping and serving. A small table is by a big picture window for meals when it’s just the two of them. Dinner parties are either in the large dining room on the other side of the kitchen, or outside at the several tables set up for coffee, dinners or entertainment. On the boat dock is another small table, perfect “for our evening cocktails,” she said.

When they moved back, the yard was a mess. There was dirt, debris and a few oleanders Gaudin planted a few years earlier. As a Master Gardener, she knew the yard had potential and started creating gardens around the perimeter of the property. She planted bottle brush, palm trees and lots of orange cosmos. A flowing yellow-flowered esperanza anchors one of the gardens, and a variety of purple salvia, day lilies and foxtail ferns fill the center of one area. She loves the color purple, so she has vitex, plumbago, iris and duranta, among other plants.

A border of large rocks — all colors and shapes — line the outside of each of the gardens. Gaudin collected the rocks over several decades and moved them — one by one — to Galveston and then again to the Kemah house. There are hundreds of rocks, intermingled with shells she collected from beaches in Galveston, Bolivar Peninsula, Florida and Alabama.

“The men who helped me make the gardens thought I was crazy,” she said. “But I wanted my rock collection here.”

Under the house, an assortment of potted plants decorate the area. The couple has converted a clay chiminea into a large planter next to the two comfortable blue swings facing each other. A multi-tiered plant stand, painted purple of course, has been hauled from houses she has lived in since her youth.

“I just liked it and always kept it,” she said.

They planted a small herb garden with basil, rosemary and stevia, and scattered seeds for arugula nearby. They also have an olive tree, Meyer lemon tree and a pomegranate tree. On the other side of the yard is a raised bed for vegetables.

And hanging from many hooks around the property are a variety of interesting hummingbird feeders and wind chimes created by a Louisiana artist.

“We have many hummingbirds here,” she said. “I like to watch them.”